Tackle the ball... tackle the weight 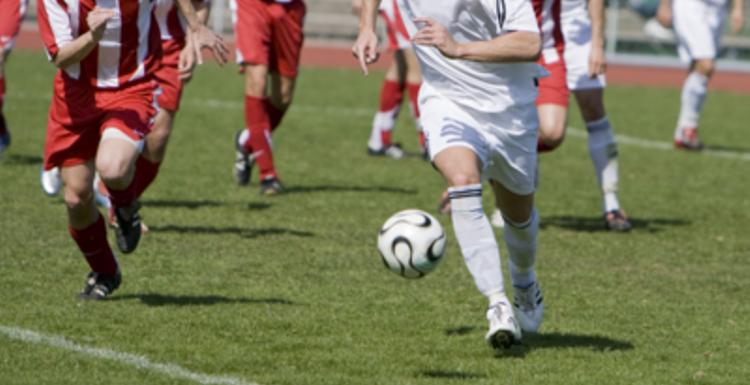 Fancy yourself as a great forward but think your stomach could hold you back? Don’t let a few wobbles stop you. Football is considered one of the best ways for men to tackle obesity. Let’s take a look at why.

According to a new Scottish report in The Lancet football training could be the ideal way for overweight men to slim down. The Lancet report covered the progress of 374 overweight men as they took part in training sessions at a local football club for 3 months. In total, 748 men and thirteen clubs took part in the study, including Celtic, Motherwell and Dundee United.

All men were offered the same weight loss tips, but only half were participating in the football programme. After a year, the men doing the football sessions lost an average of 11lb each more than the other men waiting for the programme. That was nine times as much weight as those not playing football.

The success of the FFIT (Football Fans in Training) programme has sparked nationwide interested in a new model of fitness for men.

So what makes football such a great choice for men wanting to lose weight?

Weight loss and dieting are often seen as women’s issues, so having a male-friendly place to go is really appreciated.  The men on the FFIT training programme found spending time at the club, sharing interests and experiences, enjoyable and encouraging. If more training sessions were set up then men could see their peers doing exactly the same training as them, and going through similar challenges.

Being trained by the club’s coaches meant that the men on the FFIT programme felt encouraged and motivated to keep going. Having male role models is great inspiration for men to achieve their fitness goals. More importantly, football trainers are often down-to-earth people who many men can relate to more than specialised weight-management professionals.

The range and intensity of movements in football provide brilliant overall exercise. Kicks, turns, twists and sprints all give a thorough workout more comprehensive than just lifting weights or going for a run.

The stop-start nature of the game gives a great cardiovascular workout and burns high levels of fat. Demanding sprints make the body dig deep into its energy stores, which burns more calories.  Studies have also shown that people playing football can reduce their high blood pressure and cholesterol levels by a greater amount than just running alone. Other studies have shown football to be highly effective at increasing bone density, perhaps twice as much as running.

Our bodies work as a unit but some muscles in football training are used more than others. And remember, the more muscle you build, the more calories your body will burn. Building the body of a footballer is where the hard work goes in. Find out yourself by joining a local club or sports centre sessions. Alternatively, follow our football training tips to give you a taste of what to expect before you go:

You don’t need a flat stomach for football, but a strong one helps. Your stability on the pitch is crucial, and also helps you to withstand knocks, challenges and hits. The best exercises aim to support your trunk as you run, tackle and change direction. You should therefore target exercises which access the ‘transversus abdominus’ and the small muscles in the back, the ‘multifidus’. Crunches are great, as well as the plank.

The side bridge exercise is particularly effective on the lateral muscles:

Without doubt legs are the main muscle area to work on to improve kicking performance and sprinting speed. Football training is geared towards building strength and preventing injury. Your glutes, quads, abductors and hamstrings should be worked at least twice a week, leaving around a day’s rest before a game.

If you really would rather watch football than join in, you could still reap some benefits. One study showed that men who supported their football team were more likely to eat healthily after the match. The catch? Your team has to win!

I can't imagine ever getting back into my full footy kit but I'd be well up for it if there was a team for older blokes in my area.

I also would like something friendly and relaxed - especially as I am on the grown-up side of 40! Is it reasonable to take up footy again at my age, with dodgy knees?

I'm interested in this too. But as far as I can tell it's only available in Scotland at the moment (no good for me). But I expect this might spread down further South. In the meantime, some gyms do offer floodlit pitches so if you can get enough people together for a kickaround, or join in a session, that would give the same benefit anyway. Anything for variety, in my opinion.

Would love to join a team. No idea where to find teams in my area though. Not great at football so would prefer a friendly kick around rather than a serious 5 a side league. Any ideas how I can find out this info? Cheers. R.