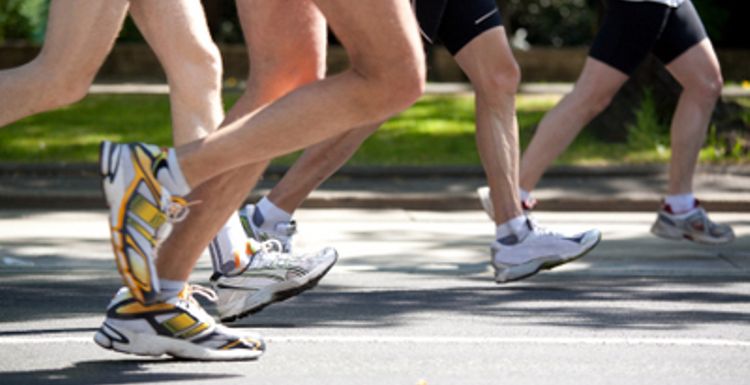 This year’s London marathon saw the tragic death of a healthy 30 year old lady. In 31 years the event has been running there have now been 10 deaths. If we include all the injuries people experience each year from running it appears it is a hazardous exercise. So what are the risks? How can we reduce them? And why do people continue to run despite the risks?

Many people love the feel of running . But some consider that regular running is unnatural and dangerous. In fact, studies suggest between 60% and 90% of runners experience injuries at some time. The main danger seems to be in the technique used by most runners which results in repeated landing on the heel. This pressure can cause injuries to the legs, feet, ankles and, most commonly, the knees.  Subsequent problems include shin splints, Achilles tendinitis, ‘Runners knee’ and  Chondromalacia (softening of the cartilage). Other less common risks include damage to the uterus for females if running on hard surfaces with no shock absorbers, and loss of calcium. According to studies, factors which increase the risk of injury appear to be running over 40 miles a week, a history of previous injuries and running form or technique.

Thankfully there are ways to continue running and  help reduce the risk of injury. One method is to ensure you wear proper running shoes with good support.  On the other hand, recent years have seen a growing trend towards barefoot or ‘minimalist’ running. This was popularised by Christopher McDougall's bestseller ‘Born to Run’.  Barefoot running is thought to give a more natural stride which in turn strengthens the tendons and ligaments. There is evidence that it decreases your risk of injury, and there are many barefoot fans who are now able to run injury-free.

But what about Marathons? Long-distance running is not dangerous in itself. But there are several factors which increase the dangers. The main one is that however fit you are, if you already have an inherent weakness e.g. a genetic heart defect, then running is more hazardous for you. Secondly, if you run in high temperatures you run the risk of heat-related illnesses such as heat stroke .

Also, if you are not prepared well enough this can increase your risk of experiencing heart problems. Many people announce they are ‘going to do a marathon’, train intensely for it, complete the race and then go back to a sedentary lifestyle afterwards. Running should be incorporated into a healthy lifestyle and maintained long-term in order to reap the most benefits and reduce the risks.

It seems most runners are prepared to work around the risks in order to reap the rewards.  The benefits include:

Improved self-image and confidence – the feeling of challenging yourself, overcoming obstacles, sticking to a routine, pushing past your comfort zone, achieving goals and surpassing your own expectations of yourself are incredible payback for running.  Regular running programmes have also been used to help treat clinical depression.

Runner’s high – this is well documented.  My neighbour runs 3x a week and swears that when she misses a run her mood deteriorates. Aerobic exercise releases endorphins, the ‘feel-good’ hormones. However,  recent research suggests that the real responsibility lies with our endocannibinoid system which is activated when we exercise.  Endocannibinoids are chemicals which produce the same feelings experienced when ingesting marijuana, including heightened feelings of happiness and tranquillity and reduced pain. It’s no wonder many of us feel we are addicted to exercise.

Mental training – you have to be disciplined to stick to your running routine. You need focus and determination to keep going. As these skills develop they can overspill into other aspects of your life.

Stress relief – running long distances gives you time alone to think or can be a short break allowing you  to ‘run away’ from your problems temporarily.  Sometimes a run is all you need to clear your head and figure out that niggling problem. Shorter, more intense runs, are great at dispelling aggression  and tension.

It is simple, natural and free – this is one of the main advantages running has over any other aerobic exercise. All we need is a pair of shoes, though many barefoot runners would even dispute that.

It’s in our nature - The roots of running  go far back. Running was part of the ancient Olympic games, which began in 776BC and running races are recorded being held in Egypt in 3600BC. Before that, we were running to not get eaten by animals. The modern marathon itself is named after the soldier Pheidippides who, after the Battle of Marathon, ran 26 miles from the town of Marathon to Athens to announce the triumph of the Athenians.

It just feels good - before science was applied to running, and the concepts of interval training and anaerobic thresholds were even heard of, people ran just because they wanted to. The act of running has pretty much stayed the same for thousands of years, and this is perhaps what continually draws people to it.

The rarity of severe problems of running should be considered against the multitude of benefits people gain from it. People can get injured doing any sport. The best approach is always moderation. Follow a regular running program, balance it with other cardio activities such as cycling and swimming and add some gentler exercises like yoga or Pilates to keep your joints flexible.  Be sensible about when and where you run and think about what kind of running might be best for you. If it makes you feel good, you should do it, just do it with your brain as well as your body.