Could light therapy help you to get up in the morning? 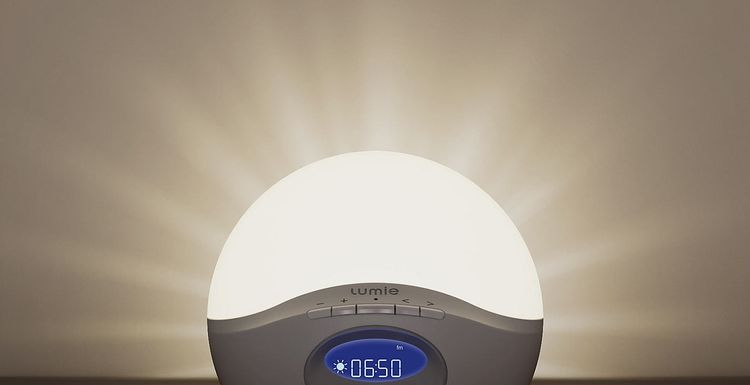 Throwing off your cosy covers on chilly mornings so you can sweat it out in the gym can be a pretty hellish routine. Could dawn simulation be a way of becoming that morning person you always wanted to be?

Many of us find it hard to wake up and get going. Others just wake up grumpy, anxious or just feeling generally ‘down’. Using a modern smartphone alarm to startle us from our slumber doesn’t help much either (yes, even if you have selected ‘nature’ noises!)

In fact, according to the journal Chronobiology International, waking up suddenly just isn’t good for us either. Apart from increasing the stress hormone cortisol, it also puts your hormones out of sync and makes you feel generally idle and depressed. Sound familiar?

So that’s where dawn simulation steps in.  Similar to using light for treating SAD, it’s a technique that involves using lamps that come on very slowly early in the morning, to mimic a natural sunrise. The intention is to rouse you gently, and leave you feeling refreshed, alert and ready for action!

How does it work?

Being exposed to bright light is a strong signal to your body that it’s time to wake up. Brightening light tells your body to reduce the production of sleep hormones like melatonin, and increase the levels of cortisol which encourage that wide awake feeling.

So what’s the evidence? There is plenty of anecdotal evidence that dawn simulators work. One study also showed that both athletic and mental performance are improved by using dawn simulation. In addition, light therapy is used widely by cyclists, rowers, British swimmers and people suffering from jet lag.

We reckon it sounds great. If you’re not a morning person it might just be worth a try.

I can see how this would work - I struggle to get up when it's dark and gloomy in the morning - though I probably wouldn't fork out the money for one of these!

The benefits of this are going to be so minuscule it's really not worth bothering forking out the however many pounds the machine would cost.

Luckily I'm a morning person anyway and an alarm waking doesn't bother me at all. So this is probably only for people who really struggle in the mornings.

I'm afraid that for me, the way to encourage getting out of bed is to have a warm bedroom. Light levels are less of an issue, although a bright winter morning is always good.

until we see sense and go to double summer time, this is a great idea. Coupled with thick curtains to stop the 4am start in summer!