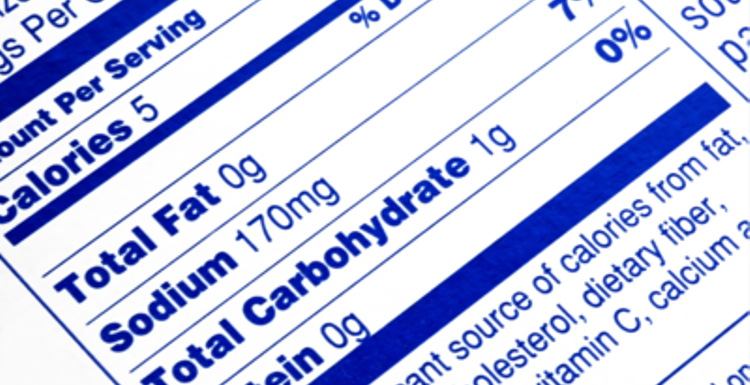 Whilst most of us are fully aware that a cake or chocolate bar is no good for us, there are times when we simply must indulge. Will standardised and clear nutritional labelling really put us off buying it? Maybe not, but it does allow for people to make informed buying choices.

Last week the government announced their latest public health measure designed to tackle obesity; a new food labelling system, due to be rolled out across the UK over the next 18 months. Using a table of clear, concise information and a traffic light colour-coding system, the new scheme will bring consistency to how nutritional information is displayed; enabling consumers to make informed purchasing decisions. The move comes after research showed that people often end up bewildered by different nutrition labels on food, and that a combination of nutritional information and colour-coding is preferred. The labelling will be highly visible on the front of the packaging, and whilst the intentions are not to demonise bad foods (it’s a Mars Bar – surely we know that’s going to be red for fat and sugar), it will give the consumer the option of fairly comparing foods when they have the option.

Information displayed consists of the amount of nutrient content per serving or portion, and includes energy content, fat, saturated fat, sugars and salt. Also displayed is the percentage of an adult’s reference intake (formally the Guideline Daily Amount) which shows how much of that particular nutrient the average adult should be having per day. The labelling shows how many portions or servings are in the package, and uses green, amber and red to demonstrate whether the quantity of each nutrient is low, medium or high.

The measures are intended to go some way to helping people lead healthier lifestyles and will hopefully have an impact on the UK’s rates of obesity. They come after ten years of talks and negotiations between government, the food industry, health NGO’s and charities, and have taken a lot longer than originally intended as industry leaders have been unable to agree on what form the new system should take. Use of the new system is currently voluntary; to make it mandatory would require legislation passed down from the European government. Despite the positive reaction from health groups, charities, and consumer groups, only 60% of foods will be covered by the new system. Two big name food giants who have not agreed to the system said labelling showing only the guideline daily amounts is more useful. However, all the major supermarket brands have taken the new measures on board, as well as many other big food groups.

As reported on the BBC website, public health minister Anna Soubry said: “We all have a responsibility to tackle the challenge of obesity, including the food industry. By having all major retailers and manufacturers signed up to the consistent label, we will all be able to see at a glance what is in our food – this is why I want to see more manufacturers signing up and using the label.”

As obesity rates in adults and children continue to increase, it costs the NHS billions of pounds every year, not to mention the individual suffering that can be caused from obesity related diseases. The idea is that encouraging small changes in peoples’ diets can go a long way to improving public health, and a consistent food labelling system makes is easier for people to eat a balanced diet. This just one of many measures that are being undertaken to reduce obesity levels. The government has been working with the food industry to get food manufacturers to reduce the amount of calories, salt and fats in food. In 2011 the ‘Public Health Responsibility Deal’ was launched to enable government and business to work together, with industry leaders being encouraged to take the lead and take measures to improve public health. Since the Responsibility Deal was launched, over 70% of the fast food and takeaway meals sold have the calorie count clearly labelled; all of the major supermarkets have committed to removing artificial trans fats (the most dangerous type of fat – check out this article on fats to learn more); and all of the major supermarkets have committed to further reduce salt in over 80 categories of foods.

Critics of the new system have highlighted the fact that the portion or serving size given on the packaging might not always be a realistic number, with people generally having more. This in turn can substantially increase the amount of a nutrient that that person is having. For example, most peoples’ bowl of cereal contains quite a bit more than 30g, so the figures could be misleading. However, any measures that help educate people what it is exactly they are eating has got to be a good thing. I, for one, am looking forward to being able to see quickly and easily how much fat and sugar are in the products I am buying. Let’s hope that all the major food manufacturers come on board. Public health should always come first over profits.