What’s the difference? The glute bridge vs the hip thrust 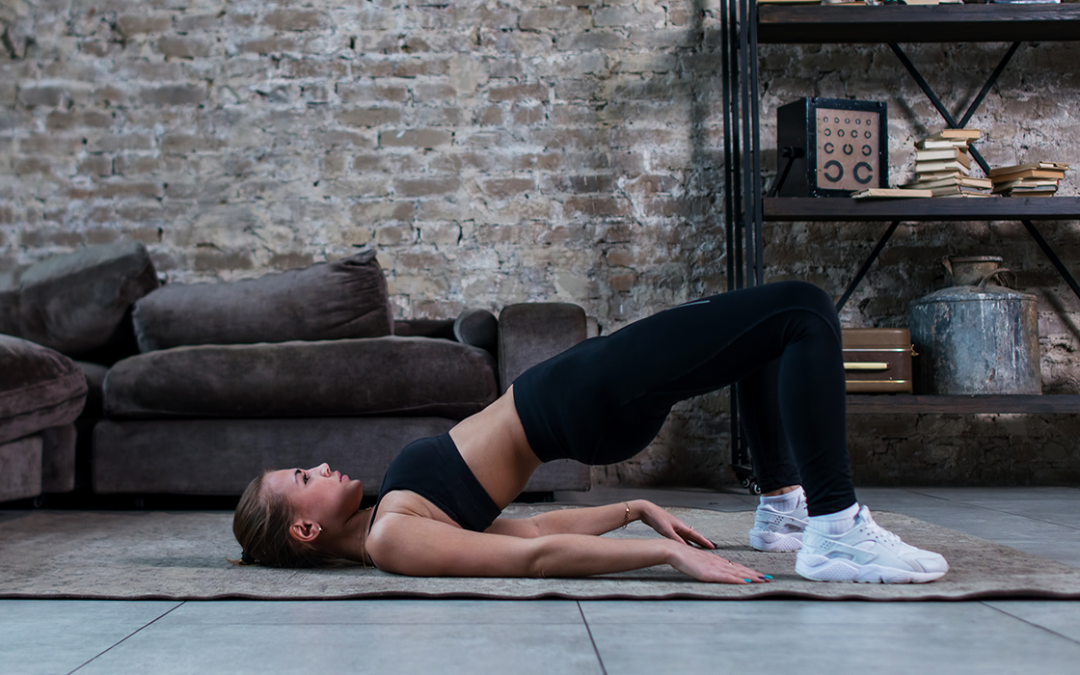 The glute bridge and hip thrust are easily mixed up. And understandably so. They look similar. They feel similar. Aren’t they just the exact same thing?

Both exercises target and help build strength in the glutes and hamstrings, but some differences make them deserving of different names.

So, here’s how to do them, what sets them apart, and the benefits of each.

What exactly is a glute bridge?

The glute bridge is a common exercise, so you’ve probably done these before. It’s a great one to do if you spend hours working at a desk as it is effectively the reverse of the sitting movement.

It can help build strength in the lower back and ultimately improve posture. The exercise at its basic level is done without any weight or equipment and relies solely on the controlled movement and hold of your own body weight.

1. Lie on a mat with your feet flat and knees bent, hip-distance apart. Arms are lying by your sides.

2. Engage your core and squeeze your glutes, lifting your hips until your knees, hips, and shoulders form a straight line.

3. Hold and squeeze tight for a couple of seconds.

What are the benefits of glute bridges?

The clue is in the name a little bit. As with all glute exercises, contracting this muscle is going to help it build strength. But it also targets the hamstrings, especially on the controlled lowering portion of the movement.

A benefit of this exercise is that you’re increasing the time under tension by doing the motion in a slow and controlled way. This makes it a much more effective exercise for building strength with each rep.

The key is to focus on glute activation. Don’t just go through the motion. Squeezing and activating your glutes properly during this movement is a good way of learning what glute activation should feel like in the other exercises you perform to target this area.

The benefits of glute bridges don’t stop there. There aren’t just muscular advantages, but structural ones too. Glute bridges are good for hip mobility and the lower back. Meaning that if you’re stuck at a desk all day, it’s an exercise that can help relieve and improve your posture.

What variations of glute bridges are there?

Once you’ve mastered the basic glute bridge, you can make the exercise more challenging. There are tons of variations, which makes it an excellent exercise for daily glute activation. For example:

1. Raised glute bridge: place your feet onto a raised surface like a box and perform the lifting motion from there

2. Single-leg glute bridge: target each leg at a time to increase the difficulty

4. Add weight: increase the load by placing a plate or ball across your hips

Got it. So what exactly is a hip thrust?

The hip thrust is another exercise that targets the glutes and the hamstrings. Some consider it a progression of the glute bridge as it’s typically performed with a barbell. But both exercises have some slight differences in terms of technique and goal.

There are several different ways to perform it. Here is the most standard one performed using a weight:

1. Sit on the ground with a bench behind your back. Keep your feet flat on the floor and bend your knees. Rest a barbell or dumbbell on your lap, just below your hips. A top tip: placing something padded between the weight and your hips will help your comfort levels a lot.

2. Lean back, so your shoulders touch the bench. Move the bar slightly up to above your hips. Now lift the weight up by driving your hips upwards.

3. At the top of your position, your knees should make a 90-degree angle and your back parallel to the floor. Your upper back and neck are resting on the bench.

4. Pause at the top for a couple of seconds, squeeze your glutes, then slowly lower back to the ground.

New to hip thrusts? Here are a couple of tips:

1. First, try them without weight to get used to the range of motion. Feel the exercise building strength in your glutes, not your thighs or lower back.

2. Remember, the emphasis is on optimal hip extension, which basically means opening and lengthening the front of your hips as much as possible.

What are the benefits of a hip thrust?

Like the glute bridge, the hip thrust also follows the correct range of motion for glute activation. It also keeps the glutes under near-constant tension (unlike squats, for example, in which glute tension is more “on and off”).

Hip thrusts often include barbells or heavy weights. This means that they’re likely more effective at increasing the power and strength in your glutes as your muscles work harder against the load.

Hip thrusts, without a doubt, work the glutes, and this is where you’ll feel it first. But they also do an excellent job at activating muscles in the legs as well. Both the quadriceps and the hamstrings are used in the exercise, helping you build strength in these areas.

Hip thrusts also contain a clue in their name about what they aim to do. They’re a great way to work on your hip mobility. As your back is elevated, you’re increasing the range of motion your hips must perform per rep compared to a glute bridge.

What are some variations of hip thrusts?

The hips thrust is an exercise you can perform when looking to build power and strength in your glutes. Start by testing the range of motion first without any weight. Then you can add a barbell across your hips to do the standard hip thrust. Once you’ve mastered this version, you can also try some of these variations:

1. Feet-elevated hip thrust: Placing your feet on an elevated surface as you perform the movement

2. Hip thrust with isometric hold: holding the weight at the top of the movement

3. Single leg hip thrust: performing the exercise with one foot off the ground to target each leg individually

4. Hip thrust with a band: using a resistance band to increase the tension further

1. The hip thrust often includes a barbell, whereas the glute bridge is traditionally a bodyweight exercise

2. The hip thrust can be used to develop strength and power in the glutes

3. The glute bridge can be used to practice glute activation and build muscular endurance

4. The hip thrust requires a more extensive range of motion from the hips and is, therefore, a good test of mobility for your hip joints

5. The glute bridge requires your shoulders to remain on the floor, whereas a hip thrust requires a bench to lean your back against

6. Hip thrusts activate the quadriceps more than glute bridges do

7. Glute bridges can be difficult to add weight to without it rolling down you. Hip thrusts allow you to carry a weight that isn’t going to fall into your face—a sure bonus.

Which one should you do?

The differences between the two exercises mean they are more suitable for some people than others. For example:

If you’re a beginner, it’s best to start with the glute bridge. It’s a great lower body workout for activating your glutes and kick-starts your range of motion. It’s also a great warm-up exercise for leading into more challenging exercises like squats, deadlifts and lunges. It can also be used as part of a circuit or HIIT workout.

The hip thrust is best for those looking to develop some serious strength and power from their glutes. If you’re looking to gain muscle mass, a move like a barbell hip thrust allows you to increasingly load up on weight. You can move through the reps quickly and powerfully to stimulate your muscles to their max.

However, a variety of exercise is the key to fitness and progression. Going back to basics can make sure you’re activating your muscles properly. Challenging yourself to increased loads can help you to test your strength and power. Both exercises can have an important place in your workout schedule.

How many calories should I burn in the gym?
Six things to know about strength training
How To Stay Motivated For The Gym

How to go from running 5k to 10k
Beginners’ Guide To The Gym
When to use the free weights vs. the resistance machines