What’s better for the body: running or walking? 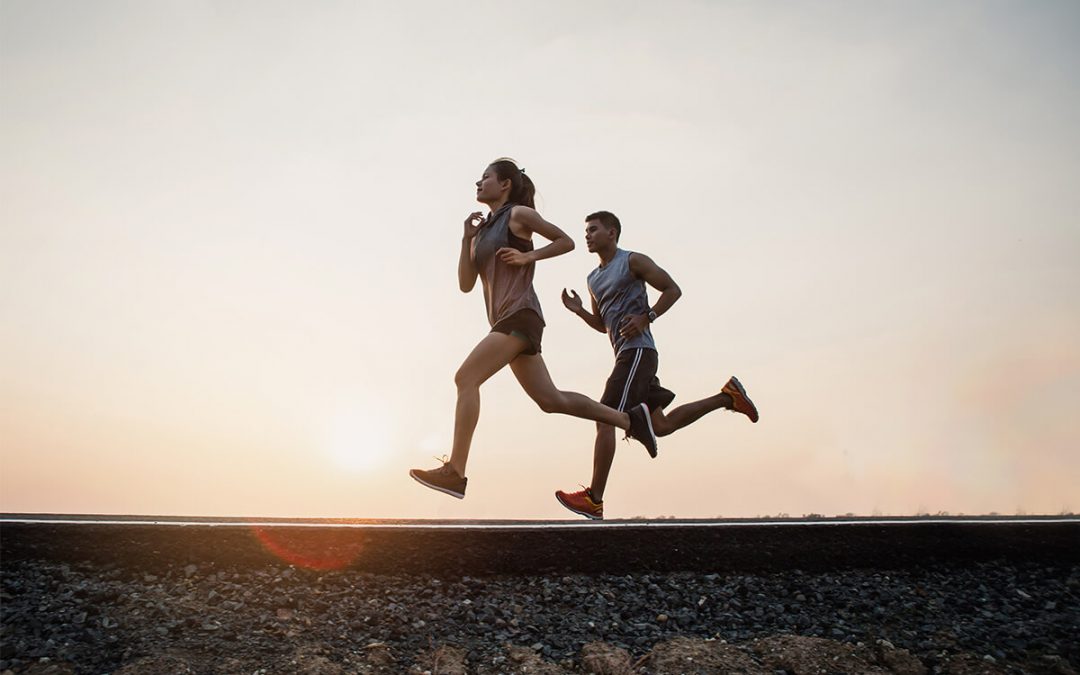 When we think of exercising for health and fitness, our minds immediately go to running.

To be healthier, I must run. Running means, I’m fitter. Time to put my trainers on.

It’s an accessible and effective form of cardiovascular exercise. True. But is it really the only gateway to improved health and fitness? What benefits does it give the body that its humble counterpart, walking, can’t?

It’s easy to feel like if you’re not joining the nation by pounding the pavement every morning, then you’re not prioritising your health. This just isn’t true.

Running isn’t for everyone. Not everyone has to run. For some people, walking is their chosen form of aerobic exercise, and that’s totally okay.

Here’s how running and walking affects the body and why there’s merit in doing both.

What type of exercise is running and walking?

Running and walking are both forms of cardiovascular exercise. They both help you to develop and maintain aerobic fitness.

In a nutshell, that means they improve the ability of your heart, blood vessels, and blood to carry oxygen and other vital nutrients to your body as and when it needs it. The result is you generally feel fitter.

What is the difference between running vs walking?

Running is more intense than walking. It demands more energy and more from the heart. As a result, it can be sustained for much shorter periods than walking.

If you exercise at higher intensities, your heart and circulatory system will get better at working at these intensities over time. That’s what people refer to when they say they feel ‘fitter’.

Think of it as a scale from 1 to 10. If running is a 7, and you keep running, your body will get better at working at that 7. In time, you might take that up to an 8 to give yourself a challenge. If walking is a 5, and you do lots of walking, your body will get pretty good at working at that 5. And maybe that’s enough for you. Perhaps you don’t care about getting to a 7.

The exact intensity you want to be ‘fit’ at is really up to you. It’s a spectrum. You have a slow amble, a brisk walk, a power walk, a jog, a steady run, or a sprint.

In terms of heart health, there’s little evidence to suggest there’s a massive difference between moderate to intense exercise. As long as it’s being done. Studies have even suggesting walking is better for blood pressure than running.

In terms of energy, the higher the intensity you’re working at, the more calories you will burn. That means running will burn more calories than walking. But, only when you’re comparing the exact same amounts of time. In reality, you could probably walk for a few hours and only run for a short while. In this case, you might burn more calories if you went for that walk.

What are the advantages and disadvantages of running?

The advantage of running is that your body will get better at working at higher intensities. You will develop aerobic endurance, and maybe even anaerobic endurance depending on the speeds you do. If this is your fitness aim, then running will help you achieve this.

Another advantage of working at a higher intensity means that your energy burn will be higher in a shorter amount of time. So, if you prefer to get all forms of exercise done and dusted in the first hour of the morning, running might help you to do that. In this way, it can help with weight loss.

Running is high impact. By pounding the pavement, you’re putting a lot of stress on your joints. When you run, you hit the ground with x3 your body weight. For overweight people or people with joint problems, this can cause a serious risk of injury.

It can cause injury in others too. Beginners who take up running too quickly or those who don’t support running with forms of resistance training are very likely to suffer from running-related injuries. Tight muscles, shin splints, and runners’ knee are all common ailments that occur from running.

In a more practical sense, running isn’t as accessible as walking. Because you need to get changed, have a shower afterwards, and have enough energy, it’s much easier to head out the door for a walk than a run. It’s harder to fit a run into your day.

What are the advantages and disadvantages of walking?

Walking is the most accessible form of exercise. It’s easy to maintain, sociable, done much more often, and requires no specific preparation.

It’s also less likely to cause you injury. As walking is low impact, it’s a much better alternative for those with joint problems or who are overweight.

In terms of weight loss, walking is one of the most underrated ways to increase your energy burn. By doing more steps, and generally moving more, you create a consistent and constant calorie burn that you’re likely to maintain for longer. Whereas running is a more conscious decision, walking requires little thought or effort. Overall, it can significantly impact the number of calories you burn during the day.

As it’s lower intensity, walking won’t increase your ability to work at higher intensities. So, you might not feel the benefit of it in your HIIT class or sprinting sessions.

Also, if you only have 30 minutes of the day where you can do any movement at all, you’ll burn less energy if you use those minutes for walking compared to running.

How do you decide whether to go for a run or a walk?

If you hate running and don’t enjoy it, don’t do it. Walk instead. Or find another form of cardiovascular exercise you prefer, like swimming or cycling.

If your body is sore, you don’t have the energy, or feel a muscle tightness you’re not used to, don’t run. Walk instead.

If you enjoy working at higher intensities, get a rush from going faster, and want to be able to hit a higher number on the intensity scale, then go for your run.

Running and walking are both forms of cardiovascular exercise. They both keep you healthy. Research is yet to declare one superior over the other in terms of overall benefit to the body. As we’ve seen, both have advantages and disadvantages.

Don’t forget that to condition your muscles, resistance training should be the focus. Muscular strength and endurance are other types of fitness that are definitely worth improving. They’ve got their own list of benefits to them. Ideally, try to make a bit of time for both cardio and resistance training.

How and why you should do the landmine squat
Should you lift heavy or light weights?
Here's how to structure a gym workout