Is muscle heavier than fat? 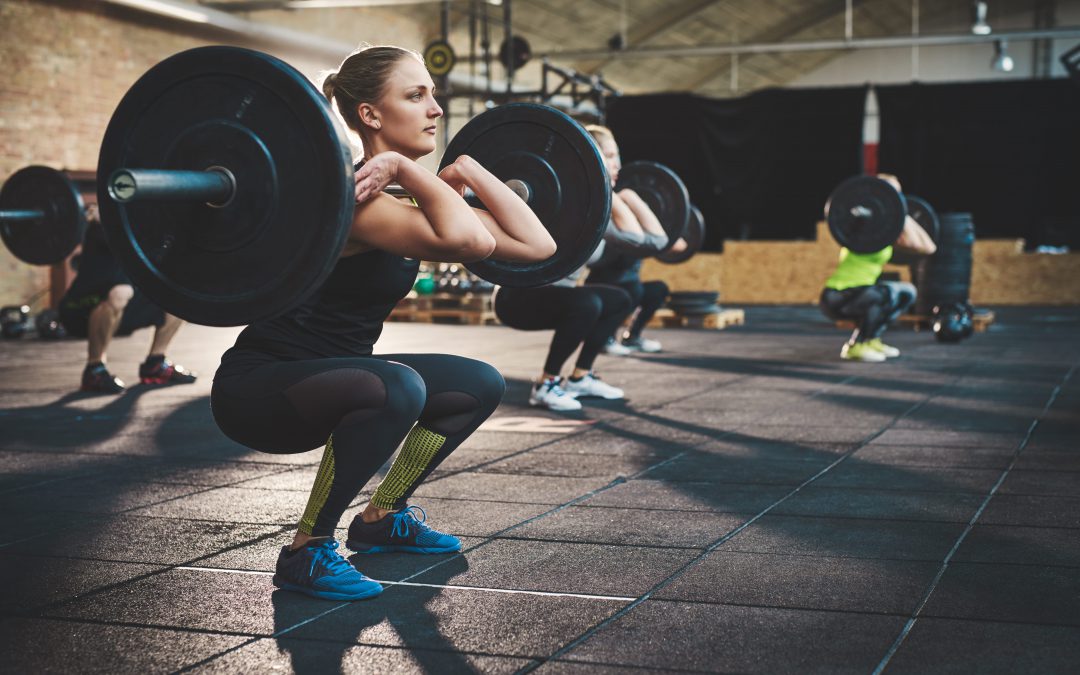 Tracking fitness progress can be tricky. There are lots of different goals to focus on. Big end results you want to achieve, made up from small markers of progress along the way. Some are determined to increase strength. Improve stamina. Develop flexibility. For these people, measuring success can be pretty straight forward.

Some of us are driven a little bit more by aesthetics. We might be looking to lose weight or bulk up. When it comes to body composition, it’s a little bit harder to measure and pinpoint progress because of the complex ways our bodies react to exercise.

A number on the scale is an easy place to start. But coming in at a certain weight doesn’t necessarily reflect overall fitness or body composition changes. What about body fat percentage? What about muscle mass? What on earth is water weight? There are many reasons why the number we see on the scale can be a little bit more confusing than it first looks.

A common statement is often applied to a mismatch between body weight and fitness progress. Muscle weighs more than fat. We hear it all the time. Is that true? What does it mean? And what impact can it have on our bodies?

So, to know to inform a weight loss journey, a muscle size mission, or just to satisfy some curiosity, let’s unpack and answer the question ‘does muscle weigh more than fat?’

Both fat and muscle are necessary for physical health. You need both to function, and both serve essential bodily processes. What can define whether our bodies are in peak health is the balance and the ratio of body fat and muscle

Fat is stored energy that protects our organs, insulates us, and assists in many other bodily functions. We all need it but in varying amounts. Women are recommended to have a body fat percentage between 21-31%, whereas this figure is between 14-24% for men. Athletes tend to have a much lower body fat percentage, which can often come at the cost of bodily function changes. Halted menstruation is a common side effect of low body fat in female athletes.

Muscle is a fibrous tissue that allows us to move. Everything our body does requires muscle. Even our internal organs are controlled by muscle, albeit a different type. Having muscle also boosts your metabolism as the more muscle you have, the more energy they require. 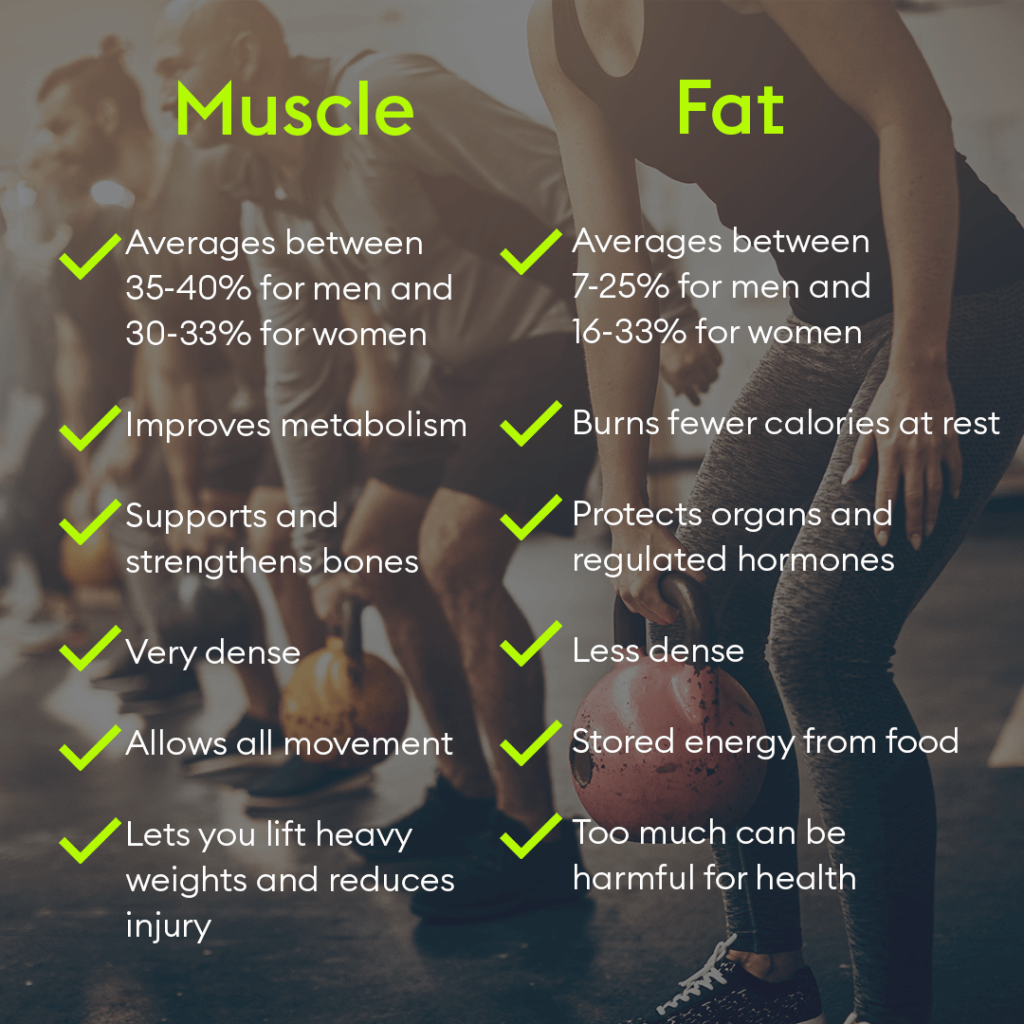 Does muscle weigh more than fat?

However, what this question often refers to is the density of muscle vs fat. Muscle is very dense, meaning that one pound of muscle appears a lot smaller than one pound of fat when you look at the volume of space it takes up.

That’s anecdote can reflect how fat and muscle look in people too. Two individuals can weigh 80kg, but if one person has a body fat percentage of 37% and the other only 18%, then those two people will look very different. One will have a larger, softer appearance. The other will have a leaner, more defined appearance.

Despite the way it can often be described, muscle cannot turn into fat and vice versa. They’re not fibres that can just transform into one another.

However, when you have increased muscle mass, you have an increased metabolism. So, on the same diet, there will be less energy excess stored as fat, as you’ll be using it to fuel your muscles.

If your muscle mass decreases, then your metabolism will decrease. You won’t need as much energy as you did before. So, on the same diet, that energy excess will be stored as fat. Muscle and fat don’t turn into one another, but their increase and reduction often coincide due to how our body uses energy.

This is where it gets a bit tricky. We know that the same physical size of muscle weighs more than fat, but it’s hard to prove to what extent this comes into play in your weight loss or muscle gain journey. Figuring out whether a surge on the scale is caused by pounds of muscle vs pounds of fat isn’t too straightforward. But there are some key indicators to help you figure it out:

Time is a pretty good indicator of whether weight gain can be attributed to muscle gain. You know yourself quite well. If you’ve been weight training consistently in the gym for a few months, then you can probably attribute weight gain to muscle gain.

If you have been doing most cardio or HIIT but have only been at it for a couple of weeks and notice a surge in the scale after a big weekend, it’s likely not muscle. It’ll be a few extra calories from your Friday night plus a bit of water weight.

There’s a reason that PT’s tend to focus on measuring their clients over weighing them.

Tracking someone’s journey to get leaner is a lot easier when you’re physically measuring the circumferences of body parts. This might not be relevant to everyone’s journey, but it is a good indicator for those looking to get leaner.

The same principle applies to the fit of your clothes. When your jeans come on and off a little easier, then you know your body composition has changed.

It’s probably the most trustworthy source of information about your body that you can get. Especially if your goals are aesthetically driven in the first place. If you want to look a certain way, then the best way to check any progress will be in the mirror. Cue those before and after pics.

You can actually calculate this percentage using high tech scales found in some gyms. You hold the handlebars, and the machine sends a current through your body. The quicker the current can move through your body, the less body fat you have. It’ll therefore spit out a body fat percentage figure after measuring your height and weight too.

So, all things considered, it’s essential to take away only the truths. Fat is important; we need it to survive. Muscle is not heavier than fat, but it is denser. And markers to progression can come in all sorts of formats. Whatever your goal, exercise for the right reasons.

Get Moving To Manage Your Stress Levels
The different deadlift types
When to use the free weights vs. the resistance machines

9 things to know about squat form
The 6 best exercises to build bigger shoulders
What is Metafit training?