The 5 exercises to add to any home workout 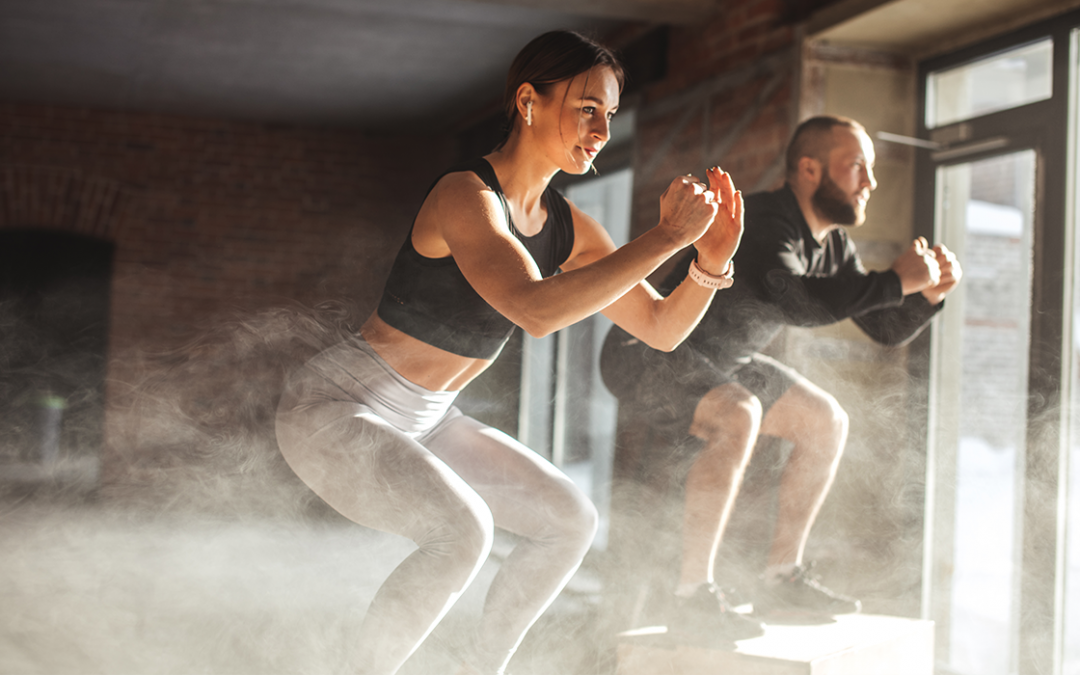 It doesn’t matter that we’re at home a bit more, it’s still pretty tricky to fit fitness in. If anything, it’s probably trickier.

Coming up with a balanced and challenging routine with the minimal equipment we’ve got takes effort. There’s no classes to walk into, machines to work our way round, or weights to lift. It’s all down to us and our inventiveness.

The key is to make our home workouts efficient. Not doing hours of obscure exercises that are impossible to do because we keep falling over. Not wasting time isolating one muscle and neglecting the rest.

Keep it simple. Do compound exercises. Be efficient with time. That means doing exercises that are straight forward, work multiple muscle groups, and engage our bodies efficiently. Two stones, one box ticked. Or whatever the phrase is.

The importance of compound exercises is the number of muscle groups they engage at the same time. This is what is meant by efficient exercise. Recruiting more muscle groups helps you develop well-rounded, full body fitness. When we’re at home, that’s just what we want our exercises to be doing.

Some days we might fancy some high impact and high tempo activity. Some days we’ll be looking to work our legs more. Other days our chest, or arms, or back. Variety is important, and we’ll need to chop and change our routines depending on our goals.

But, there are some key exercises that should be the building blocks of our workouts. Compound in nature, effective, challenging but with the ability to modify. They’ll help keep our workouts efficient and effective. Allowing us to build a routine around them.

So, if there’s 5 exercises you need to be incorporating into your home workouts. These are them.

The squat is one of the most well-known and commonly performed exercises. And for good reason. It’s a functional body movement that humans have been doing way before it was a thing in the gym.

In terms of exercise, squats are integral for improving lower body strength, as well as core strength and stability. Anything that engages your core gets the big tick of approval. A strong core supports your everyday life in ways you won’t even realise.

The squat mainly targets your quads at the front of your thighs, your glutes in your bum, your adductors in your inner thigh, and your soleus in your calves. But it recruits many more muscle groups to help support and stabilise the movement too. This is where your back, core, and other muscle groups in your legs like your hamstrings come into play.

Key considerations: An incomplete squat is much less effective and can increase your risk of injury. The crease of your hip needs to come parallel with your knees. 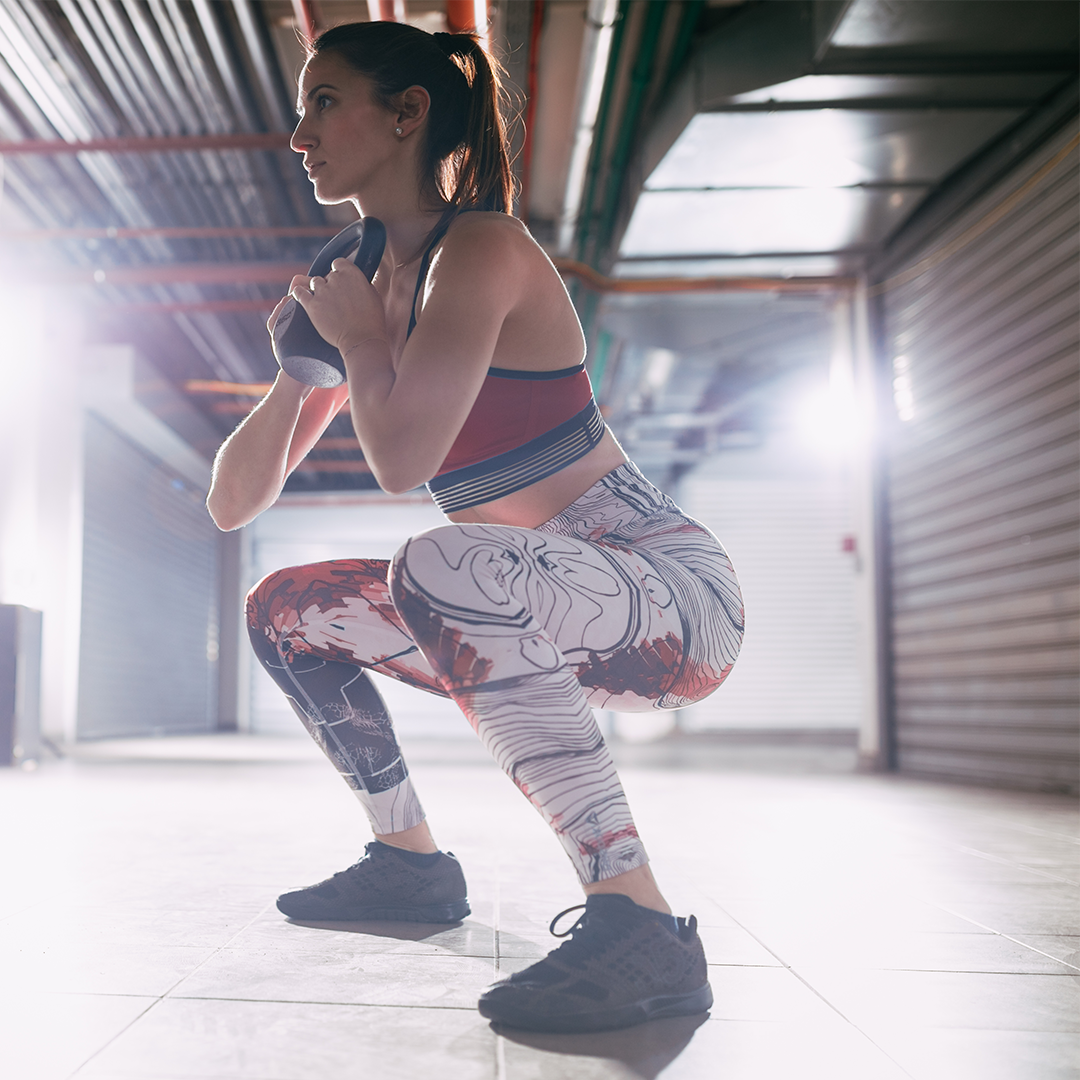 The 1.5 squats aims to make the traditional version a tad trickier by increasing the time your muscles are under tension. When at the bottom of your squat, rise halfway, before squatting back down to the bottom again. Then come all the way up to standing. This means that you’re doing one and a half squats each time.

A unilateral type of squat that works one leg at a time to increase the difficulty. With one leg behind you and a foot resting on a raised surface, squat into the forward leg. It looks more like a lunge than a squat and places more focus on the quads than the traditional version. Your arms are free to hold a weight too if you want to make it more difficult.

Pistol squats are notoriously difficult and require brilliant balance as they’re done on one leg. With one leg extended out in front of you, perform the squat to full depth before coming back up again. This is a tough move and might take some progression before you’re able to nail the full thing.

The plank is an isometric exercise, meaning that there’s no movement involved. You just need to hold the position for the muscles to become engaged. Sounds easy, but those familiar with the plank will know that it’s not.

The plank has it’s place in every exercise routine from HIIT, to Yoga, to strength training. It’s one of the most effective core exercises you can do and we already know how important our core is.

Keep that back straight. No hunching. Putting your feet closer together will make it tougher on your core. If that’s what you’re in the mood for. 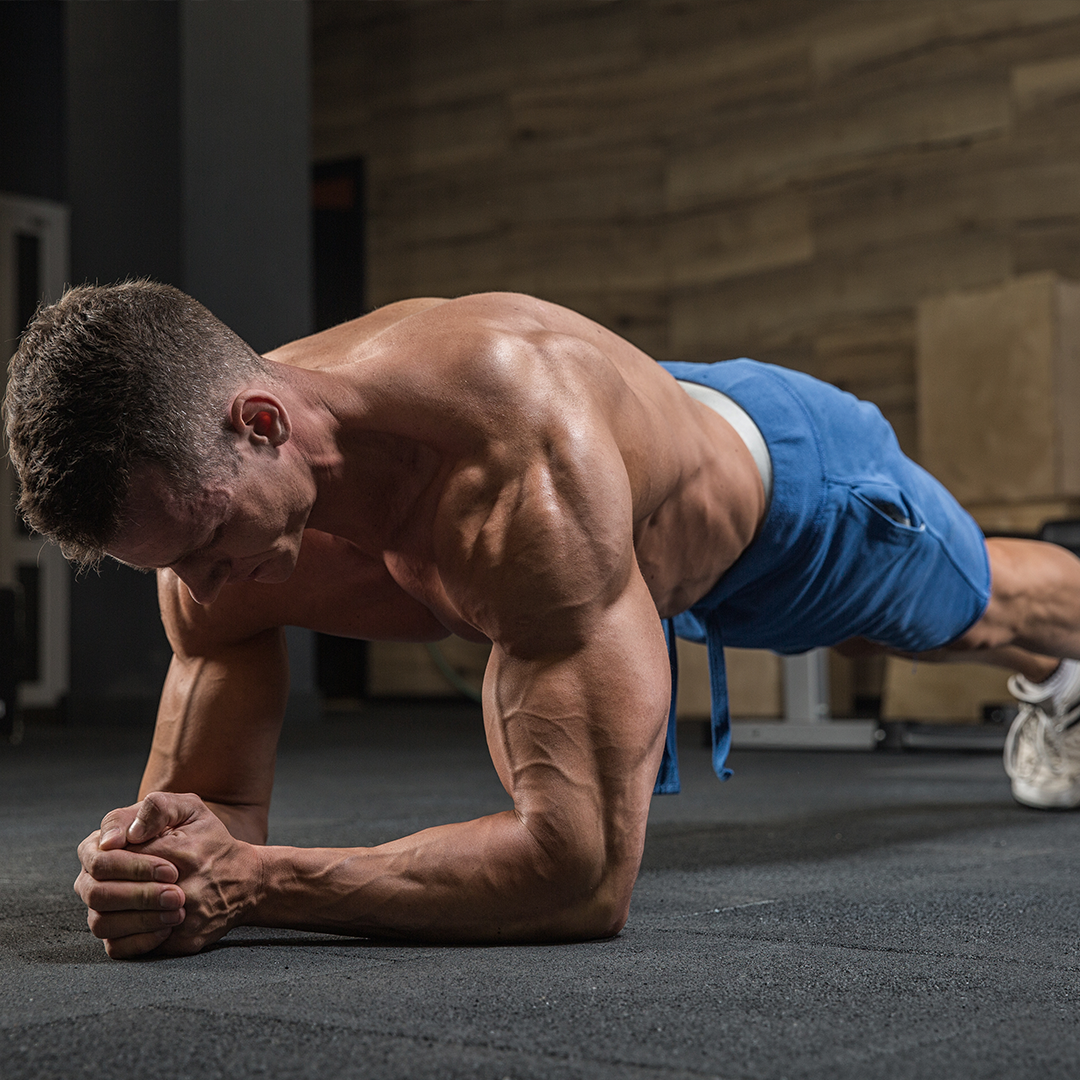 The side plank helps to recruit more muscles in your sides, surprisingly. This includes the side of your core and the outer muscles of your legs. The weight is shifted to one hand only, with the other extended into the air or placed on your hip. The feet are stacked on top of each other so that you’re facing one side. Make sure to swap it round and work the other side too.

From a high plank position, continually tapping your opposite shoulder with your hand will engage your arms and shoulders more, making it the perfect upper body day variation.

Also called the body saw, this involves shifting your weight forward from the plank position so that only your toes are touching the ground, then shifting it back to bring your heels closer to the ground. You can even do this with sliders and push yourself further back using your arms and bringing yourself forward again. It’s tough. Remember to keep your core strong at all times.

The humble push-up has been around for ages, and it’s not going anywhere. An easy and accessible exercise that’s a true test of upper body strength.

From a high plank position, lowering and raising the body using your arms is targeting more muscle groups than we could possibly list. The primary ones used are the muscles in your shoulders, arms, and chest. But a whole host of muscles in your core are very much involved too.

For lots of people, the traditional push-up is too hard to do straight away. So, there’s lots of ways you can modify and progress up to it. 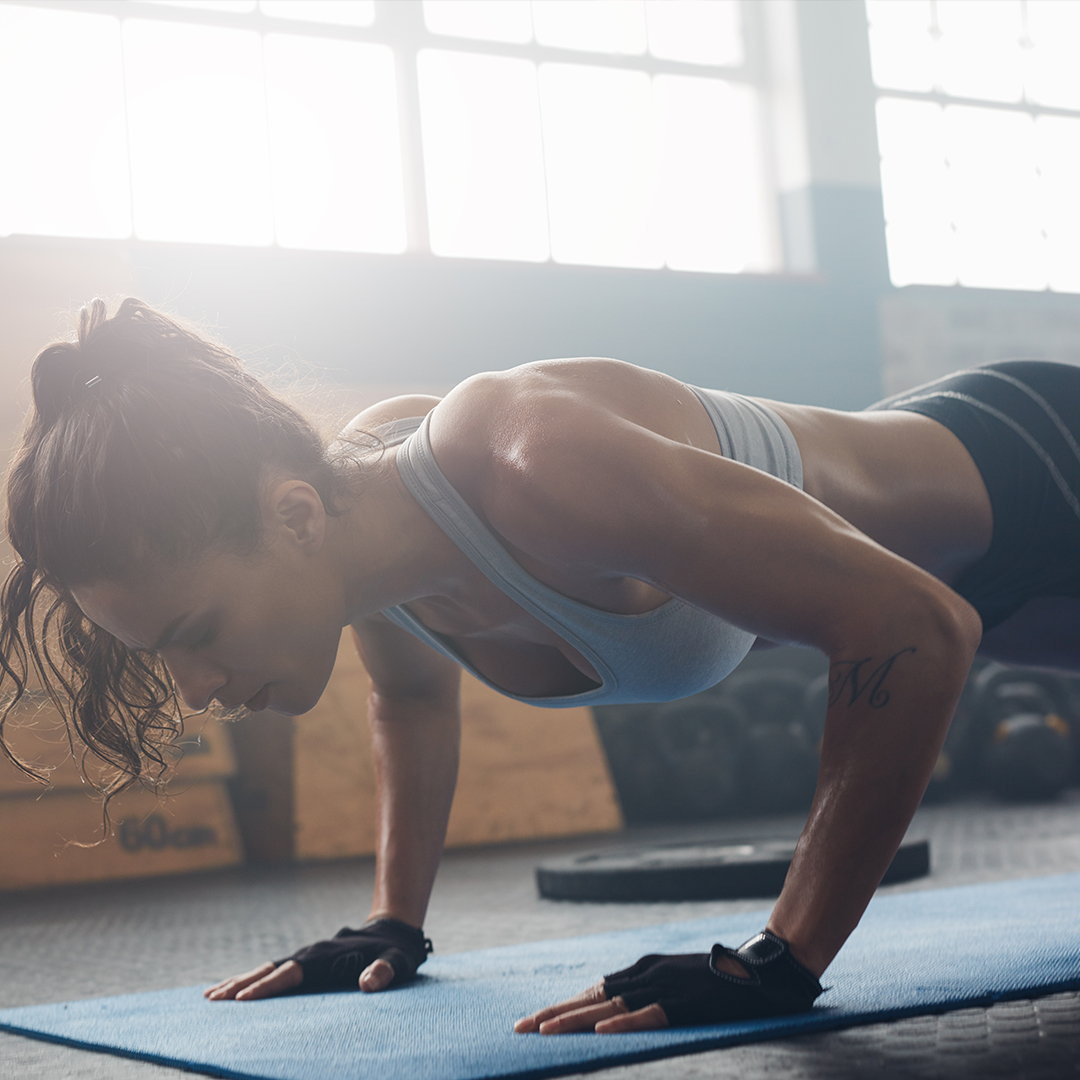 For those that aren’t quite ready for the full thing, pushing up from an incline helps alleviate some of your body weight and make it a bit easier. The bigger the incline, the easier it gets.

For those that are done with the traditional version, pushing up from a decline shifts more of your body weight into your upper body, making it harder. It also targets your shoulders a bit more. Again, this decline can be done at varying degrees.

Whilst lowering yourself down to the floor, bring one knee up, at the outside of your body, as if trying to touch your ear. Repeat with the other leg the next time. Your core has to work much harder to maintain stability here and your arms will be engaged more too.

Probably everyone’s least favourite exercise. The burpee is not only a test of your strength, but it’s a cardio killer too. Ten of these in a row and you’ll be feeling the heat.

Burpees tick so many boxes, which is probably why they’re so tough. Emulating the key parts of a push up, asking a lot from the legs, and getting your heart rate up equals one effective exercise. Everyone does a burpee a little differently, but most variations see you go from squat, to plank, to push-up, to plank, to squat, to jump. Over and over again.

The burpee really is a full body exercise as it engages muscles all over your body. It’s a key functional exercise that can intensify any workout.

Don’t collapse onto the ground from the plank position and keep your core braced. Lower and raise yourself with control in the same way you would a push-up. 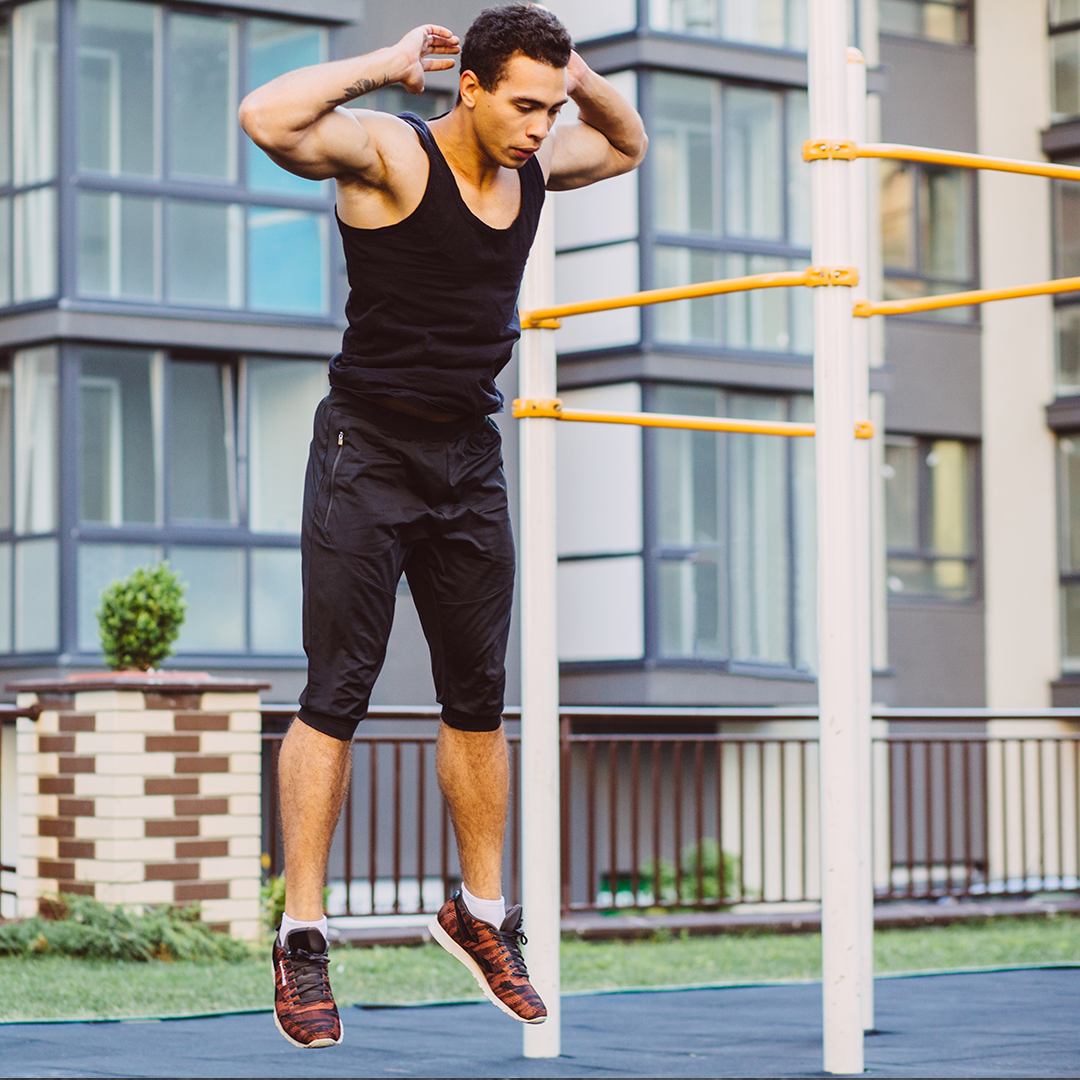 This version removes the push up portion and the jump up. From the plank position, jump your legs in and then out again, rather than lowering yourself down to the ground and coming up to standing.

This variation also helps if you struggle with the push up portion. Bring you knees to the floor to perform the push-up, then rise back to plank before jumping up again.

Give those legs an extra burn with the box jump burpee. Instead of jumping up and down at the top of the move, jump onto a box and back down again.

Okay, so the deadlift is a little harder to incorporate into home workouts, as it’s traditionally done with a heavy barbell. It’s a powerlifting exercise. But it’s one of the most vital compound exercises you can do, so we couldn’t neglect it. And there’s some variations you can incorporate into your routine from home.

The deadlift is a relatively simple movement. It involves lifting weight from the floor, up to hip height, by hinging at the hips and the knees.

The deadlift works most of the muscles in the posterior chain including ones in your back, bum, and back of your legs. It also works your quads at the front of your body too.

It’s traditionally done with a barbell, but you can use dumbbells if you have them.

Key considerations: keep your weight in your heels to stabilise yourself and to make sure you’re engaging the right muscles. 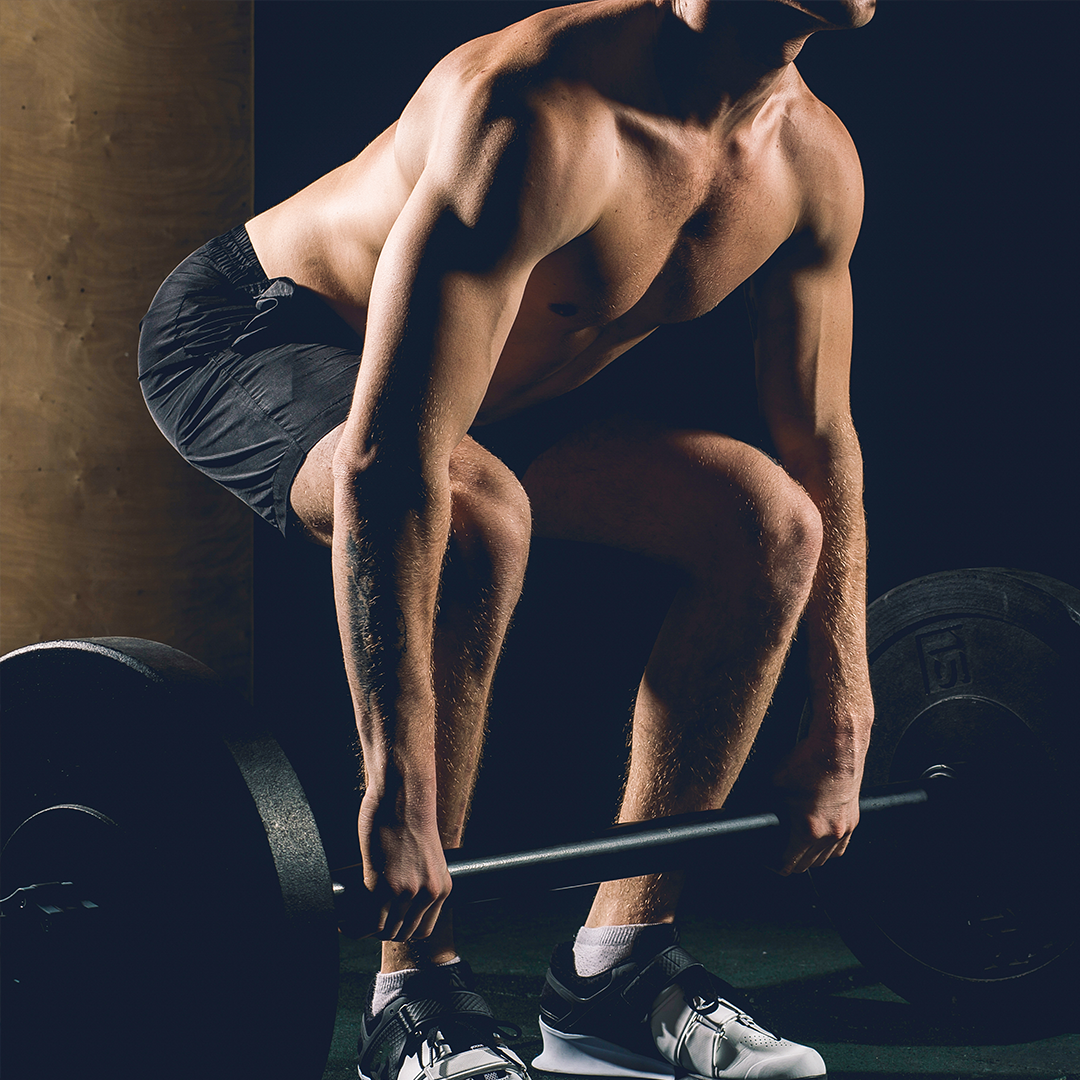 The dumbbell deadlift itself is a variation, but another way you can do it is by using a resistance band. You can use a long loop band. Place both feet on it at shoulder width apart, grab hold of it with each hand and lift to standing.

This version increases the range of motion in the movement and engages your hamstrings a little more. By standing on a raised surface, perform the deadlift with dumbbells, returning them a little lower than your feet on the way back down.

This version is tricky enough as it is so can be done with little to no weight. Perform the deadlift by hinging forward at the hips. As you do so, your non-engaged leg should extend behind you until parallel with the floor. You can do this with a dumbbell in each hand if you have them.

There we go. Five key building blocks for your full body workouts. Keep them at the centre of your routine, varying or adding other exercises around them. Because being effective and efficient with our exercise is what we all need to do.

How to make the most of the plyo box
What is body conditioning?
Hussle's marathon training plan